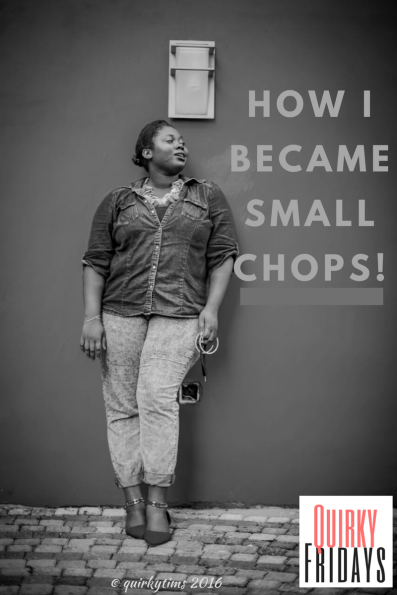 This is the story of how I became an accidental side-chick aka side-dish aka coleslaw aka chips aka Nando’s garlic bread aka SMALL CHOPS!!!….

There was this man, let’s call him Mr B, I loved him from time but had to let him go because he wasn’t ready for a relationship and I couldn’t wait for him to get where he needed to be emotionally, so I bounced.

I remember said bouncing day clearly… It was my friend’s hen night, I got home late, my brain swirling in a pool of vodka and great courage that rivalled David’s Goliath moment. I dialled his number and told him that as much as I loved and wanted to be with him, I was done waiting for him to grow up and know what he wanted.That’s how this uncu said “I love you”, when I don finally make up my mind. Tah! Tufiakwa, the jazz couldn’t catch me this time.I am DELIVERT!!

Anyways, I let go and blocked him from my life; it was necessary to help me concentrate and work on my battered relationship with Mr A; my then ex boyfriend who later became my fiancé and then back to ex(This is a story I will share soon or maybe write a book and cash in!) I felt Mr A knew me almost all my life and we could make it work so I gave him another chance.

P.S: Always stick with your initial decisions biko, giving Mr A a third chance is high up on my “top 10 mistakes made while adulting!”. Knowing a man all your life doesn’t mean he’s the one for you, don’t be afraid to let go because it’s a familiar feeling/setting/situation.. Channel your inner Elsa and LET IT GO!!

I digress… So, it’s 2 years later, I’m single, actively getting over Mr A and then Mr B saunters in like a Panther ready for the kill. We start talking, catching up and obviously the “feels” are still there like embers from a camp fire; almost fading away but enough to start a raging fire with the right coaxing. (Chai I have bars mehn!)

I’m wiser and I’ve learnt valuable lessons from my last relationship which I put to good use and made a list of questions to ask Mr B. Asking if he had a girlfriend was first on the list, Mr B said nope he didn’t and had been single for a while. He said he still felt the same way about me, missed me but wasn’t fully ready for a relationship, I wasn’t as well so we sorta decided to take it slow and see how things pan out.

A few months later, I was sitting at work, bored out of my skull and decided to go on Instagram. I explored for a few minutes and something said to click on the following tab(this shows what your followers liked etc)

Bam! Na so I see a photo of Mr B aka my one and only semi-bae with one peng, sumptuous looking babe, babe had written all the writeable as caption for the photo. Now, in a world where everyone is bae, boo, baa-baa black sheep, I just perched and tried not to do a Drogba aka off-side move aka fly into the pit of conclusion, so I donned on my Sherlock Holmes hat and FBI vest, dug further to verify my findings and oh my, I sure did find all the things my optimistic heart refused to accept.

Findings showed that the lovely lady was Mr B’s girlfriend and in that moment I understood why some women reach out to the wife/gf. Sometimes it’s just out of empathy; not wanting your fellow woman to be saddled with a bum/twat.

Long and short as my naija people will say, Mr B had a girlfriend, a girlfriend who was confident of her place in his life. Confident enough to post photos of them on social media with appropriate lovey-dovey captions to follow and Mr B’s seal of approval aka “like” was stamped on them.

Na so I lock up my mgbeke heart that was doing gishgish for Mr B and moved on. You’d think I learnt my lesson abi? Efian! Mr B was still given a second chance; one that bit me in the bum, nose, heart, eyes heck it bit me everywhere and then some more but that na tori for another day!

That is the story of how a whole me, odindin baby geh, became small chops without her knowledge.

Hello quirkies and welcome to #QuirkyFridays!!!! I am so glad I was able to overcome my fear of sharing this personal story. #MajorKeys happening here if you’re not aware, taking charge of the narrative gives you more power than you can ever imagine.

DISCLAIMER: There are many sides to a story and this is MINE. In the spirit of being fair and a better person, I have left out certain details that will cement Mr B’s #YorubaDemon status but also protect the girl in question, so yes there are some things missing from this. Meanwhile, this ” many sides to a story” thing sef, what if one person refuses to discuss their side, what do you do? Not tell yours? Let me know what you think.

What’s your accidental/deliberate small chops story ? How did you deal with the situation? What excuses did s/he give when you found out? Does anyone choose to be small chops? How does that work please? Please help answer the poll below to add to my body of research, hehehe!

That’s it quirkies, have a wonderful weekend and keep on smiling, someone needs it!

One thought on “How I became small chops!”

This year, I’m doing a “read 24 books” challenge. Here are some books on my reading list.